The RAJ collected a good 30 minute delay at Nagpur need to shed off that little extra flab at the earliest as making up in the last section of this route is virtually impossible due to heavy congestion. As if on cue, RAJ quickly picks leaves Nagpur in a hurry. Nagpur – Itarsi section has always been one of my favorite sections in this entire route. The landscape varies from a flat Vidharba region and quickly transforms into green and beautiful ghat sections as we enter Madhya Pradesh.

The first of the ghat sections Teegaon – Chichonda is quickly done without any fuss or a halt. A few bankers were awaiting arrival of P4 hauled 24 coachers to push them up the gradient. RAJ, a mean 18 coacher P7 hauled champion, made a mockery of the gradient and before we could realize, the RAJ thrashed a busy Amla junction at MPS leaving AP express behind. As darkness set in, we were forced to miss the scenic Maramjhiri – Dharakoh section, which TN express usually covers at dusk to witness the beautiful sunset. Evening gave way to darkness and we had to settle with seeing our own forgettable reflections now as interior lighting took over.

Itarsi passed at a steady 3okmph without stopping and we picked up quickly enroute to Bhopal about 90 kms away. Itarsi – Bhopal section is another beautiful and scenic landscape, which cannot be enjoyed on the RAJ in either direction due to its timings. Arrived Bhopal on time and couple of gracious railfans, who decided to just encourage us on our trip, treated us to some local delicacies and satisfy that sweet tooth of ours. As we departed Bhopal, the dinner saga was quickly done with and unlike the previous night, we decided to call it a day as we have a very hectic 3 days ahead of us. As much as I wanted to see our RAJ overtaking my first love TN, I decided to give it a pass and rest.

Woke up a couple of times as we skipped Mathura and Agra. RAJ had made up all of its lost time and is now all set to reach Delhi on dot. As always , we were slightly trolled a bit before Nizamuddin and reached our first destination, Hazrat Nizamuddin with a 15 minute delay. We quickly moved hearing to the announcement of the two heavyweights GT and TN arriving back to back shortly. RAJ did overtake TN then , a sight I missed or should I say wanted to miss ?

It has been 14 long years since I last visited Delhi and I was unsure of what was going through my mind. The next leg of our travel is late night and we have a full 16 hours to kill in our Capital. Delhi is home to one of the most congested railway networks in the country and it is no wonder that the RRI system (Route Relay Interlocking) at New Delhi Railway Station is one of the world’s largest RRI system certified by the Guiness Book of World Records. There are multiple terminals to decongest traffic and regulate trains. New Delhi & Old Delhi Junction are two of the larger terminals, supported by Nizamuddin, Delhi Sarai Rohilla & Anand Vihar catering primarily to South , North & Northwestern, North, Northeastern and Eastern parts of the country.

Since we had a good 16 hours to go and board the next train from Old Delhi Junction, we quickly decided to make a short visit to Rewari Steam Loco Shed, which is about 90kms from Delhi on the Delhi – Jaipur line. Rewari Steam Loco Shed is a delight for steam lovers and classic locomotives. It houses the trio which pulled the very first train from Thane to Bori Bunder in 1853, The Sahib, Sultan & Sind. A quick cab ride through the better parts of the city took us just outside Delhi Sarai Rohilla, where we checked in to the cheapest available lodging to quickly freshen up and get ready for a heritage visit. 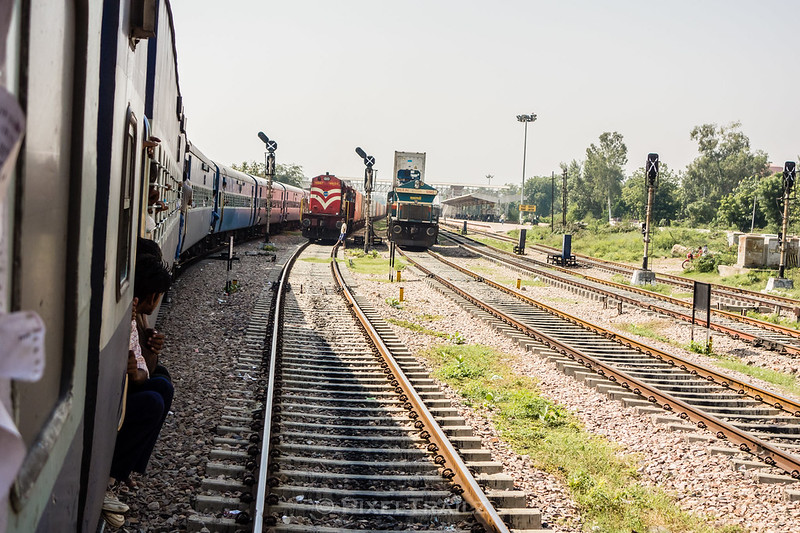 Breakfast was a quick roadside, dipped in Amul butter hot and smoking Aloo parathas served with some local accompaniments. At 10 INR per paratha, we had no room to complain and there was no need either.Incidentally, there was some unprecedented delay on one the regular Delhi – Rewari passenger and hence our Bikaner bound ICE was made to run as a commuter train upto Rewari. On hindsight, our current booking in 3A proved to be a blessing in disguise. Old Delhi, Delhi Sarai Rohilla and the route to Jaipur is certainly not a sight to behold. It passes through some of the most backward and unhygienic areas of Delhi, in start contrast to the roads and infrastructure around Nizamuddin and other parts of the city. One striking aspect though was the Delhi metro. It was omnipresent all across Delhi. Sreedharan really took Delhi Metro to great heights, literally in some areas. Thanks to the lousy commuter run of our train, we reach Rewari a good 30 minutes behind schedule. We get down, took in some customary tea and walk towards the steam loco shed under a blazing hot October Sun. Rewari is a a diesel lovers Railfan Paradise. It serves as a diesel filling station and sports a never ending stream of locomotives and double container freights from 4 different directions. No electric poles to block your views or obstruct your clicks. We decided to spend some time railfanning over there on our way back.

Hundred meters ahead and a short 5 minute walk following the pointers all along the way and we reach the loco shed with no fuss. The place seemed deserted and left us wondering if we were in at a wrong time. Much to our relief a few workers let us in and explained that the ONLY restriction was “NO SMOKING”. Rewari steam loco shed , unlike the active diesel and electric locomotive sheds in India, lets you do whatever you do want as long as you do not disturb anything or anyone. We were free to get in to the locos, shoot photographs of anything , anywhere and anyhow. Roam around unsupervised anywhere. Considering all the red tape involved in other maintenance facilities of Indian Railways, it was a welcome change and nothing, not even the blazing hot sun could suppress our excitement and energy which was well spent spread over a period of 2-3 hours.Getting up, close and personal with Sahib, Sind, Sutlan and the regal of all, Akbar was an experience which I cannot express in words in a simple blog. Hundreds of clicks, bottles of water, cokes and pepsi’s later, it was time to go back.

Do you recollect that commuter train with an unprecedented delay, which made our express into a commuter ? Well, appparently that is now in Rewari and will leave for Delhi soon. Locals in a small town like Rewari know train timings inside out and since our special train will now have its own timings not in sync with the locals timings, we had an almost empty train transporting us to Delhi. A request to footplate was promptly turned down and we were soon chugging our way to Delhi.

Some Love Here Too

4 out of 5 dentists recommend this WordPress.com site

- Where I see the world go by.

Thoughts and Musing when I can...

The ultimate guide for independent travellers seeking inspiration, advice and adventures beyond their wildest dreams